Geoengineering is a deliberate, large-scale technological manipulation of processes to control Earth’s natural climate system with the aim to counteract the pernicious effects of climate crisis. Land-based geoengineering to limit global heating relies on the core concept of carbon capture, utilisation and storage (CCUS). This is a process that captures carbon dioxide (CO2) emissions from sources like fossil fuel powered power plants and is either reused in various industrial processes or buried deep underground in geological formations like old oil and gas reservoirs and saline aquifers. Bioenergy with carbon capture and storage (BECCS) is combining the use of biomass in place of coal as a fuel to produce electricity and capturing the emitted CO2 by either storing it or using it in other industrial applications where purified CO2 is a valued commodity (figure 1). The assumption underlying BECCS is that it helps in CO2 removal (CDR) or “negative emissions”, because trees absorb CO2 and convert it into biomass which is then burned for energy and the released CO2 is captured and buried deep underground. This captured CO2 is also reused in other industries. One of the most endearing technologies for the fossil fuel industry is Enhanced Oil Recovery (EOR) by flushing oil wells with the captured, purified and liquified CO2.

The Intergovernmental Panel on Climate Change (IPCC), taking cognizance of BECCS, has listed it as one of the prominent CDR technologies in the 1.5°C mitigation pathways (see Special Report: Global Warming of 1.5°C, chapter 2). In three of the four 1.5°C mitigation pathways, BECCS technology for CDR is extremely crucial, except in that of a low energy demand (LED) scenario. However, the report itself highlights uncertainty over this untested technology and its massive land requirements and consumption of resources as the key challenges.

Two of the four pathways rely heavily on BECCS to meet global energy demands which is termed unsustainable in other chapters of the same report. Thus, the magnitude at which BECCS is required in IPCC’s own 1.5°C mitigation pathway scenarios is unsustainable. A study from Stanford University concludes that employing BECCS on a meaningful scale would require land area the size of India and Canada combined and thus would be a direct threat to global food security and biodiversity protection. It is estimated that growing dedicated plants for BECCS would require 0.1-0.4 hectare of land per tonne of CO2 removed.

Large areas of forest land and other arable land would have to be taken over by fast growing, monoculture plantations that can supply the requisite biomass to generate enough electricity for the world. Monoculture plantations lower immunity in plants and make entire species vulnerable to extinction, which would further hamper our food security. Maintaining these monoculture plantations would consume huge amounts of water and fertiliser, pitting BECCS directly against our water security.

BECCS captures emissions from biomass burning, but the entire process has many nodes where additional CO2 is released. CO2 will be released from clearing the forests, tilling the soil, producing the fertilisers to grow the biomass for BECCS, transporting the biomass to the power plant and, burning biomass (figure 2). There is the added risk of the CO2 stored deep underground leaking back to the atmosphere or creating seismic instability.

As mentioned here, biomass burning releases 1.5 times CO2 to generate the same amount of electricity as compared to coal burning. What the proponents of BECCS conveniently ignore is that burning biomass also releases the same pollutants like coal burning. Big oil and gas companies have a vested interest in promoting BECCS and other CCUS projects as they plan to continue drilling for oil and gas using CCUS-EOR well beyond 2040. 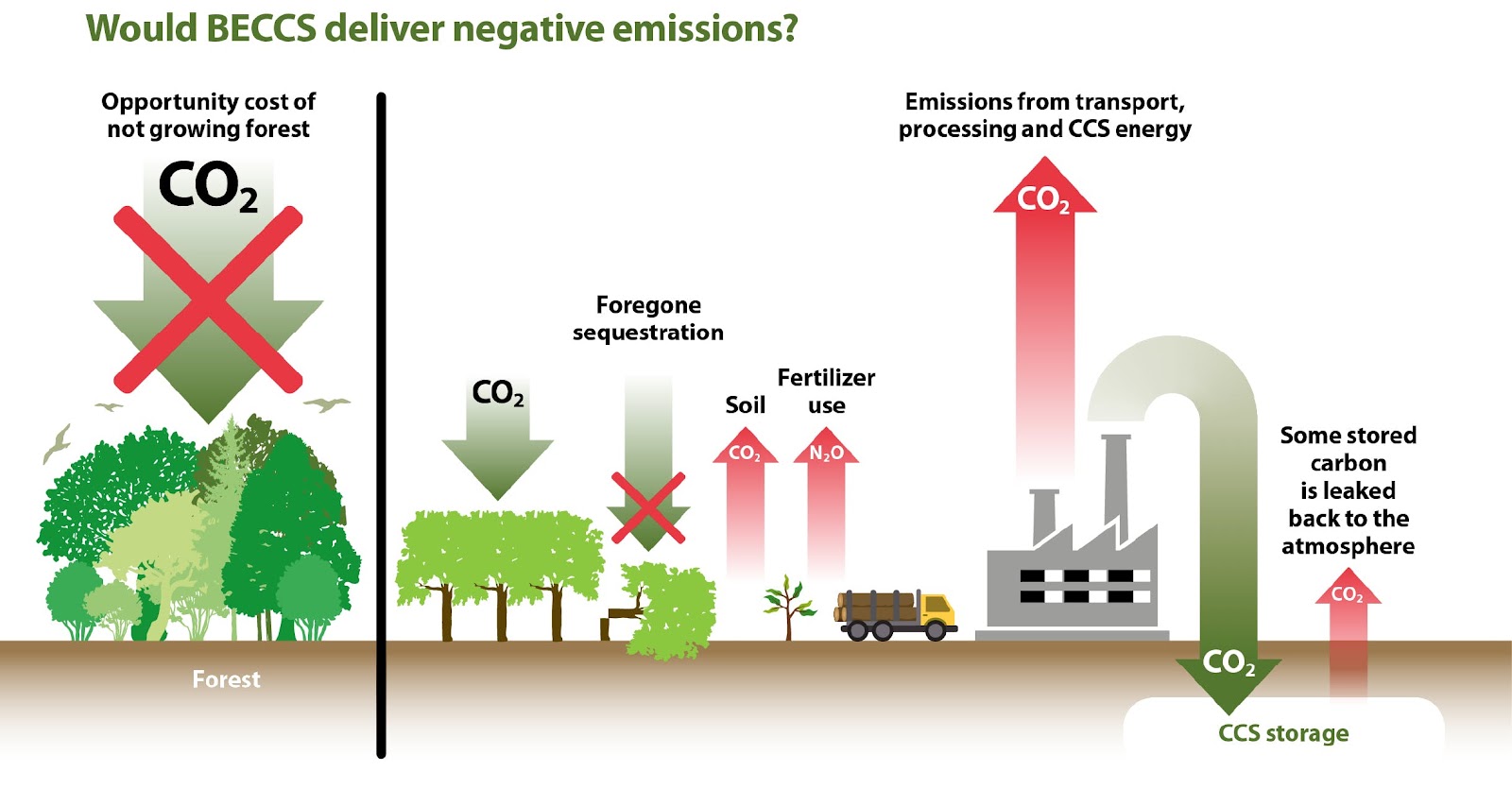 CCUS and BECCS facilities are operating at multiple locations across the world, as seen in this primer by International Energy Agency (IEA). The United States of America is leading with multiple BECCS projects in the power and other industrial sectors, including the world’s first BECCS project that can sequester 1 million tonnes of CO2 per year, situated in Illinois. This project is facing a risk of closure in 2020 due to lack of funding. In India, Oil and Natural Gas Corporation Limited (ONGC) and Indian Oil Corporation (IOCL) have partnered for a CCUS-EOR project in IOCL’s Koyali refinery in Gujarat. CCUS is being rapidly embraced by Indian oil and gas companies and in such a scenario, it is imperative to start a debate on the adoption of these contentious technologies.

We need to embrace the fact that lowering our energy consumption and protecting our native forests is the only way to meet the target of keeping temperature rise to below 1.5°C of pre-industrial levels and hence, low energy demand pathway of the IPCC is the best hope. This report by Climate Land Ambition and Rights Alliance (CLARA) lists out mitigation pathways specifically focusing on low risk land-based approaches that protect, restore and sustainably manage existing natural ecosystems, while respecting human rights. Solutions that coopt conserving the natural ecosystem, protecting the rights of indigenous communities, lowering the energy demand and weaning away from fossil fuels are the solutions that will enable equitable and just mitigation of climate crisis. Based on the currently available technology, it is safe to say that the only meaningful way to achieve the 2015 Paris Agreement goal is through adoption of a low-energy lifestyle and not through business as usual with energy production and consumption, and reliance on untested and risky technological approaches like BECCS.