Assert Your Rights In Public Hearings 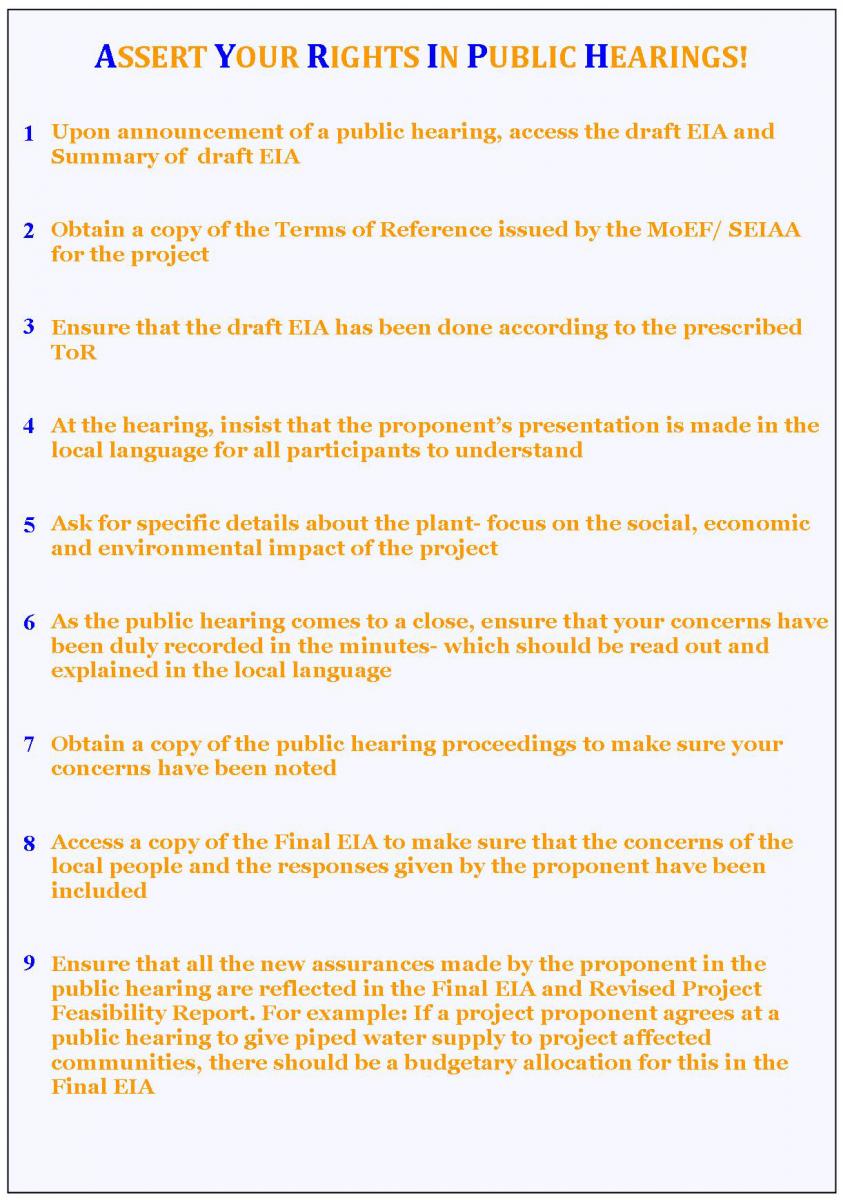 Public Consultation Process in a nutshell

Public Consultation (PC) is currently the best opportunity and the biggest platform available, for local communities and for all those with a stake in the environment of the region in which a TPP is being proposed, to get queries clarified and to express concerns and record their opposition to the project, if it legitimately impacts their rights. The outcome of the public consultation process depends both on the number of participants and on effective participation by the public. The queries, concerns and protests of the public are to be noted and, if found correct, may be used by the Regulatory Authorities to reject the application.

The PC is conducted after the Project Proponent/Applicant submits the draft EIA to the MoEF or SEIAA and simultaneously submits a letter to the relevant SPCB to conduct the PC.

The Project Proponent/Applicant must take these viewpoints into consideration and revise the draft EIA accordingly. The grant of EC/rejection of application by the Regulatory Authority will be based on the Final EIA submitted.

The Public Consultation is in two parts:

Structure and Intent of PC

Advertisements announcing the Public Consultation (Public Hearing and Written Response) should be clear and appropriate.

Advertisements should be placed in one English daily and one Regional Language Daily in circulation in that district.

The SPCB has to give at least one month’s notice to the public about an upcoming hearing.

The SPCB should make arrangements for the public hearing to be video graphed.

SPCB officials to accurately record the minutes of meeting.

Any erroneous or changed fact about the project or its impact in the documents presented ahead of the hearing or in the minutes recorded and read out at the hearing can be reported by the public to the officials present at the public hearing.

Any procedural lapses in the conduct of the public hearing can be reported to the MoEF/ SEIAA along with a demand for a fresh hearing.

During the one month notice period given for the public hearing, written responses from the public will be received by the SPCB.

The MoEF/SEIAA should reach the responses received as part of the Public Consultation process to the Project Proponent/Applicant through the ‘quickest available means’. The written responses received will be part of the Public Hearing Report submitted by the SPCB, and should be available in the offices of the Panchayat, Zila Parishad, District Magistrate and the SPCB, apart from the SPCB website.

1. Can I attend the Public Hearing and also send in a Written Response?

2. I am not residing near the proposed project site - can I still participate at a Public Hearing and voice my concerns?

Yes, you can, as long as you have valid social and environmental concerns to make!

3. I don’t have a core environmental issue to be raised in Public Hearing meeting. Instead, I want to raise queries about social and employment-related issues. Can I do it?

Yes, the public hearing is intended to focus on the environmental impacts of a proposed project. However, the word ‘environment’ is to be interpreted broadly and issues concerning social as well as economic (including livelihood) impacts are part of EIA studies. They can, therefore, be raised during public hearings. Social Impact Assessment and Rehabilitation and Resettlement Plan are part of EIA studies and issues concerning these can be raised during the hearing.

4. Who can send Written Responses about a project?

Anybody who has a plausible stake in the environmental aspects of the project or activity, like activists and media personnel, apart from local communities, can send in written responses.

5. What should be done if a project has been awarded EC without holding a Public Hearing?

A petition has to be filed against the EC at the National Green Tribunal. This has to be done within 30 days of the communication of EC, extendable to 90 days if there is a justifiable reason.

6. Can the Public Hearing of two projects be held simultaneously at same time and same venue?

No, this is not allowed, as per an Office Memorandum issued by the MOEF in April 2010[3].

7. Can a Public Hearing be postponed?

Yes, but only when there is an emergency. Otherwise, the public hearing date, time and venue cannot be changed.

8. Can the people demand postponement of the public hearing?

Yes, but only if there have been any procedural lapses in conducting the hearing - like the venue being too far or the Draft EIA not available in notified places. The people can make a joint representation to the District Magistrate/ Collector or Deputy Commissioner.

9. Is there a regulation on how many people can talk at a public hearing?

No, there is no limit! All those who are present at the hearing should be given an opportunity to voice their views.

10. Is there a fixed time limit for the public hearing?

No! As long as there are public queries to be answered, the hearing should continue.

11. A project has been proposed in a highly polluted area. Can I then ask about the total impact of all the polluting projects in a public hearing for one project?

Yes, you can! The EIA study includes an assessment of the cumulative impact of projects- proposed and upcoming- in the project area. Issues related to the Cumulative Impact of these projects should be allowed in a public hearing.

12. If the project site is in the boundary of two states, where should the public hearing be held?

In such a case, the hearing should be jointly organised for both the states by the respective SPCBs.

13. Is there a way to find how the SPCB publicised a public hearing?

Yes! This information should be available in the Public Hearing Report. An Office Memorandum issued by the MoEF in April 2010 requires the SPCB to mention in the Public Hearing Proceedings how adequate measures were taken to inform the local people about the hearing time, venue and date. The SPCB should also certify that the process followed for the hearing was adequate. [4] 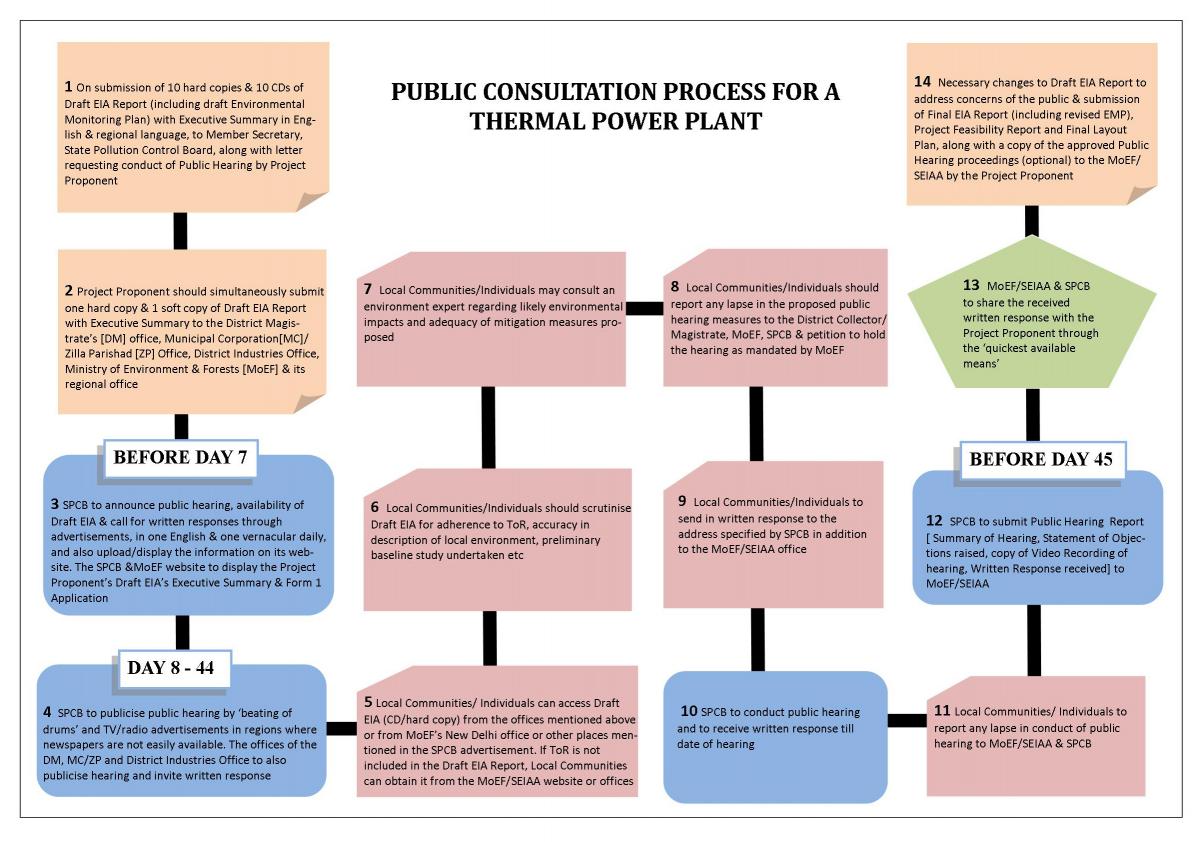 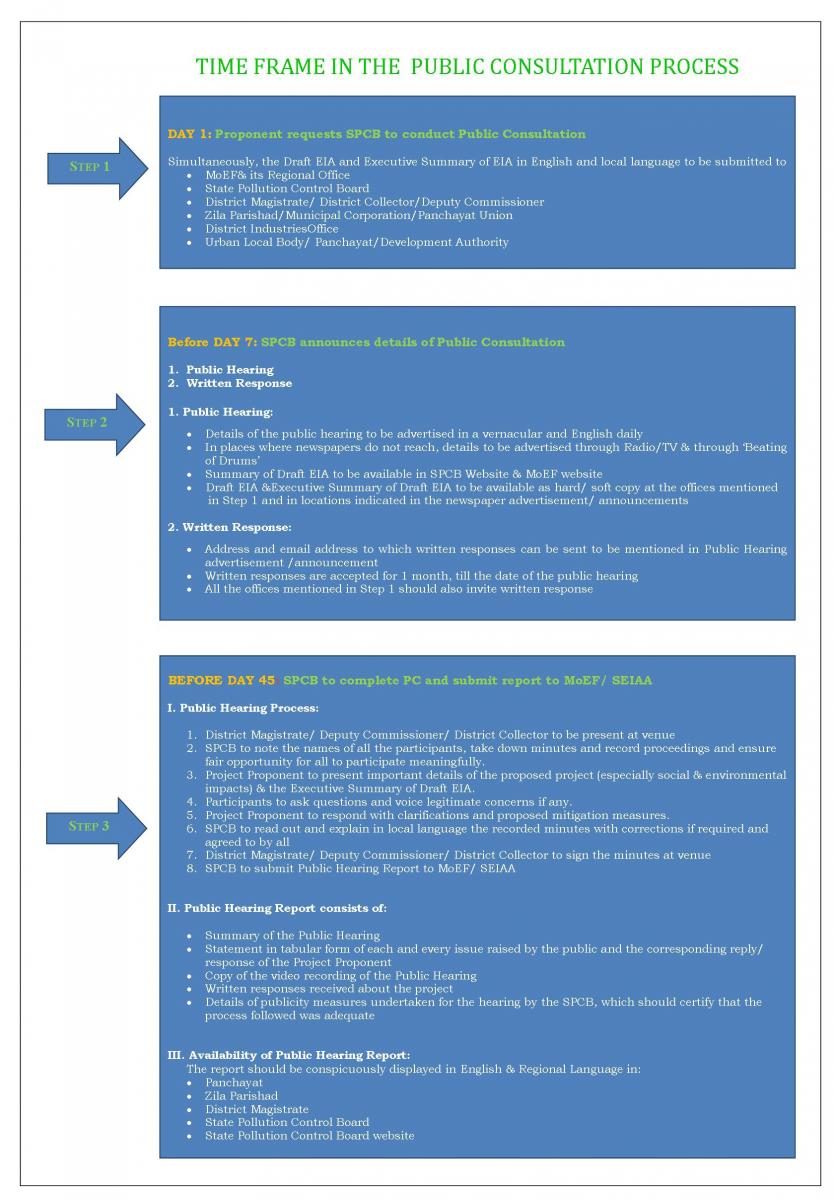