Marine geoengineering - not a quick fix for climate crisis

As life on our planet struggles in Anthropocene to arrest the increasing greenhouse gas emissions and resultant global heating, a “new technological magic bullet” is gaining traction among humans. Proponents of geoengineering advocate it as the only way to meet 2015 Paris climate agreement targets while maintaining our current over-consumptive lifestyles. Geoengineering or climate engineering as it is also known, is deliberate and large scale manipulation of Earth’s natural processes. Geoengineering is being proposed as a technological fix to counteract the pernicious effects of climate crisis. Geoengineering is an umbrella term that encompasses technologies falling under two categories: greenhouse gas removal and solar radiation management (SRM). Carbon dioxide (CO2)  removal is the main subcategory under greenhouse gas removal technologies to remove climate warming gases from the atmosphere, while SRM technologies aim to cool the planet by reflecting away sunlight from the stratosphere itself, thus preventing greenhouse gases to absorb solar radiation and heating our planet. 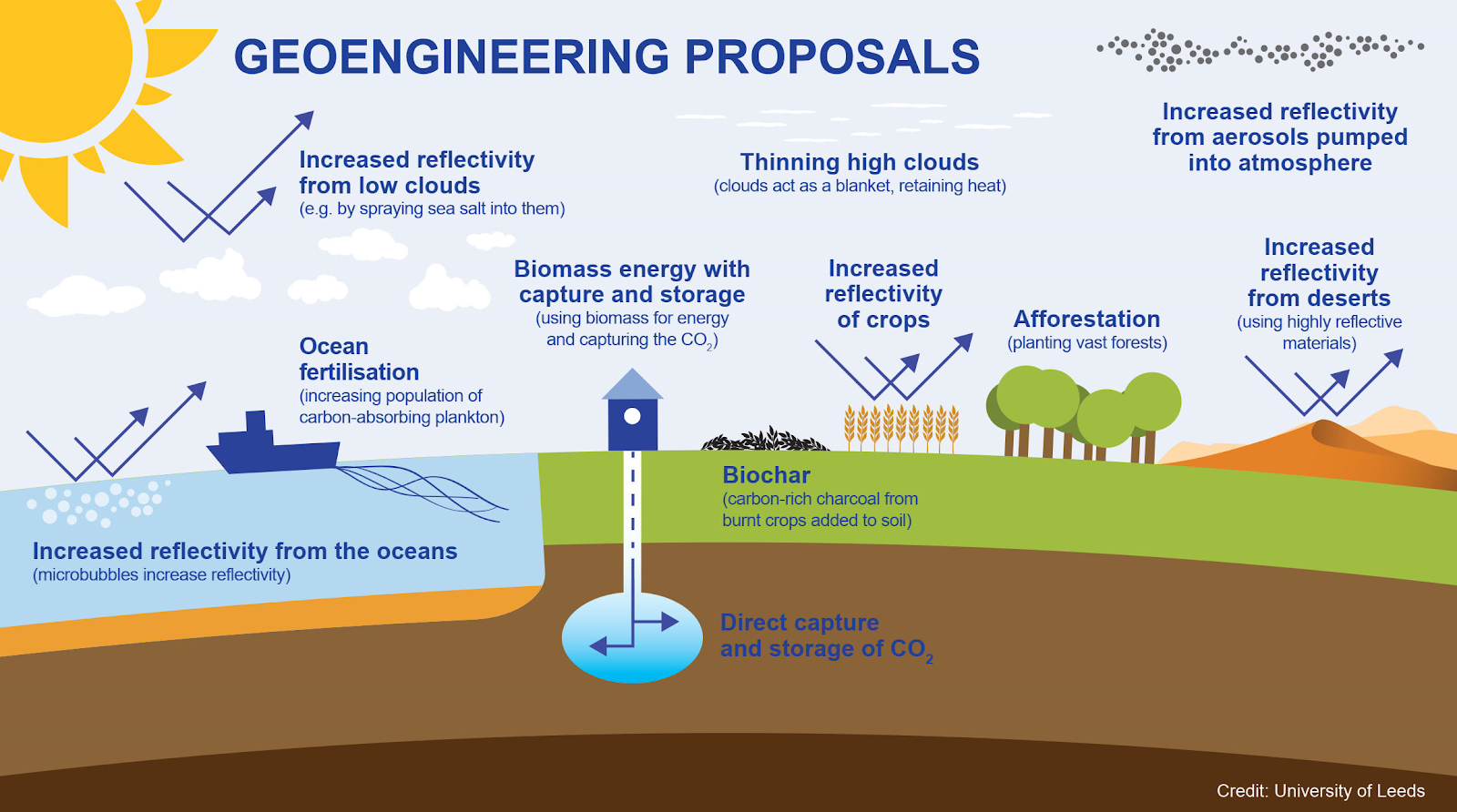 Geoengineering proposals include modifying land, air and water to either reflect more sunlight back into space or reducing greenhouse gases in the atmosphere. Image courtesy: University of Leeds

Greenhouse gas removal and SRM both rely on oceans, land and atmosphere to deploy their technological solutions. In the first part of this three part series, we focus on technologies under marine geoengineering that propose large scale modification of our oceans to arrest greenhouse gases and reflect solar radiation. The International Maritime Organization (IMO) defines marine geoengineering as “a deliberate intervention in the marine environment to manipulate natural processes, including to counteract anthropogenic climate change and/or its impacts, and that has the potential to result in deleterious effects, especially where those effects may be widespread, long-lasting or severe". Ocean fertilisation under greenhouse gas removal and ocean foam or microbubble technology under SRM are the two marine geoengineering technologies that have attracted geoengineering proponents.

Oceans cover 71 percent of Earth’s surface and are the largest carbon sinks. Ocean life is supported by sunlight that penetrates through the ocean waters and this heat trapped by oceans plays a part in heating our planet. Phytoplankton (microscopic species in oceans) harness solar energy, consume CO2 and release oxygen (O2) while growing, and are the base of the ocean food web. Phytoplankton consume carbon dioxide on a scale equivalent to forests and other land plants. Part of this carbon is carried to the deep ocean when phytoplankton die, and part transferred to different layers of the ocean as phytoplankton are eaten by other ocean creatures, which themselves reproduce, generate waste, and die. Growth of phytoplankton in oceans is controlled by the availability of necessary nutrients for growth, particularly iron and nitrogen. Proponents of ocean fertilisation plan to accelerate this process by supplying iron and nitrates in the ocean to enhance phytoplankton growth. They say that higher phytoplankton growth will lead to higher CO2 sequestration from the atmosphere.

Ocean foam or microbubble are SRM technologies that aim to increase the reflectivity of the ocean waters to reflect  more sunlight back into space, thus reducing the heat trapped by the oceans. This is usually achieved by spraying chemical foaming agents on the ocean surface, kept floating using latex/polystyrene. Proponents say microbubble technology can be deployed with ease as ships travelling around the globe can be used to distribute chemical surfactants that can stay as microbubbles for weeks, while some groups are also researching whether brightening ship wakes can reduce climate change.

Proponents of ocean fertilisation and ocean foam technologies overlook the fact that oceans already are our largest and most important carbon sink on Earth, storing around 50 times as much carbon as in the atmosphere. Oceans are also providing us more than 50 percent of oxygen and have complex and highly evolved ecosystems which we have not fully understood. To effect meaningful change, a quarter of the global ocean surface  would have to be fertilised. The impacts of artificial fertilisation on such a large industrial scale in our oceans cannot be foreseen or quantified. High growth of phytoplanktons leads to floating mat-like structures on the ocean surface (algal blooms) that can physically hinder mixing of oxygen from the atmosphere with surface waters. This leads to the creation of dead zones by depleting oxygen in the water below, resulting in large scale death of fish and other large ocean animals. This will have a deep impact on the global fishing community and threaten human health as fish are an important protein source for more than half the human population. Livelihood of coastal communities dependent on thriving ocean ecosystems will be threatened. There is enough evidence through scientific studies to show that the amount of carbon sunk to the ocean floor is either very low or undetectable because much of the carbon is brought back to the atmosphere via food chain. 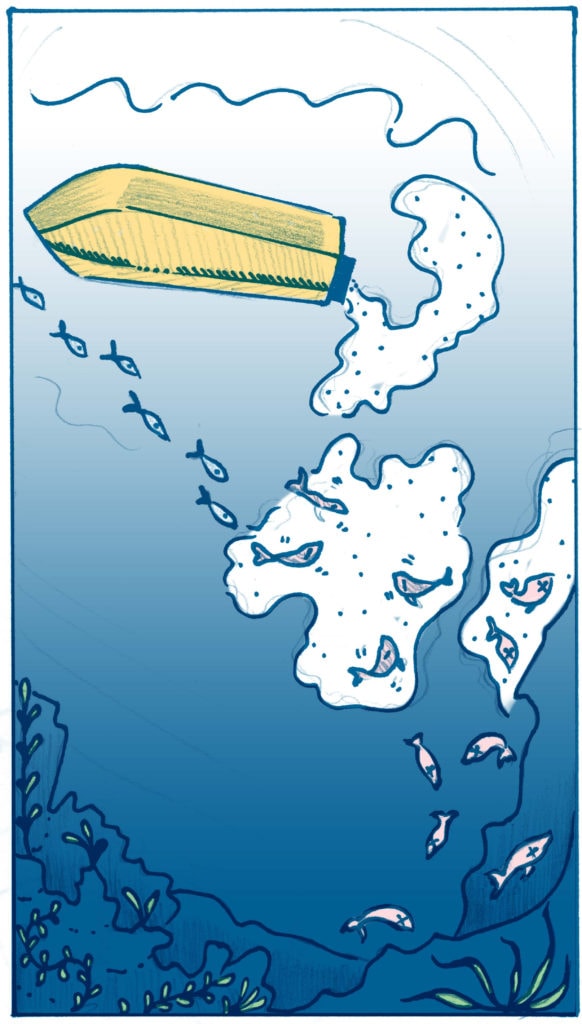 Microbubble technology is flawed in its concept itself as it overlooks a pressing problem of microplastic pollution in our oceans and its implementation would lead to more microplastics in the oceans. We already know the deleterious impacts of plastic pollution on marine ecosystems and on human health, and plastic industry itself is dependent on fossil fuels and contributes to the emission of greenhouse gases. Having an artificial layer of reflective chemicals on the ocean’s surface would deplete oxygen levels below the surface, leading to the death of marine life. Microbubble technology will cut access of light for the ocean life, destroying marine ecosystems and lowering ocean productivity. Without access to enough light, oceans would not be able to absorb the carbon that they already do and we would have extra greenhouse gases to deal with in the atmosphere. While large scale deployment would certainly have an impact by reflecting sunlight, we cannot predict what these will be, owing to lack of research on tempo-spatial impacts on marine ecosystems. As ocean waters are connected through ocean currents and impact weather patterns globally, tinkering with this natural process would lead to unpredictable changes in ocean currents, leading to disruptions in rainfall patterns across the world. The resultant cycles of floods and droughts would lead to rise in geopolitical tensions across regions. Economically powerful nations could modify weather patterns anywhere in the world deploying chemical surfactants at chosen sites, effectively giving them a handle to punish other nations for reasons they believe in. The BP oil spill in the Gulf of Mexico in the year 2011 saw the company spray tonnes of chemical surfactants to disperse the spilled oil, but it was later discovered that this chemical surfactant killed much more marine life than what the spilled oil could have. Microbubble technology is a solution for man made problems that if deployed, will create far larger and complex problems to solve.

Marine geoengineering is the only branch of geoengineering that has any international regulatory framework and is subject to regulations under ‘Convention on the Prevention of Marine Pollution by Dumping of Waste and Other Matter, London Protocol 1996’. Under this convention, ocean fertilisation is specifically prohibited, but new experiments continue to be announced in different parts of the world under the guise of expanding local fish numbers for commercial  purposes, with the project in open seas off the coast of Haida Gwaii being the most controversial ocean iron fertilisation project till date.

Here, we have discussed only two main categories of marine geoengineering projects that are under different stages of conceptualisation to be implemented globally. The Joint Working Group of Experts on the Scientific Aspects of Marine Environmental Protection (GESAMP) has published an expert review of a wide range of proposed marine geoengineering techniques.

In India, marine geoengineering is at discussion levels only with the main concerns of Indian policy makers around governance mechanisms for such large scale trans-boundary projects. There is justified apprehension around the financing, governance and implementation issues before making a start. The ecological risks and aversion to large scale modifications to natural processes has kept India away from marine geoengineering projects.

It is crucial that we identify and relate to the fact that any meaningful path to meeting the 2015 Paris Agreement targets goes through our shift away from fossil fuel-dominated societies to alternative and sustainable sources for energy. We cannot continue getting electricity from coal, and let our transport run on petrol and diesel, and then leave it on the oceans to soak up the greenhouse gases. The marine geoengineering methods are untested, prohibitively expensive and, have sufficient known negative impacts that warrant us to tread with caution.